What Will Smith taught me about failure

Author’s Note: Unlike any other article I have ever written, this one has a major twist in the middle. If you read it, read to the end, please. ~ Melissa

Even when Will Smith tells me I should.

I probably should give you some background.

The first thing to know is — I have failed spectacularly and publicly. I have extracted the lessons, and moved forward, and blah, blah, blah. I would much rather have succeeded, but whatever.

The second thing to understand is, and I can’t believe I’m telling you this, I have had a celebrity crush on Will Smith for years. It’s a standing joke with which my husband and kids love to torture me.

My daughter recently texted me that Will Smith was going to be filming a movie at her school this year. She asked me to please not abandon the family. My husband told my son that his mom may leave home soon because Will Smith is going to be in Savannah. These people are hilarious. Hilarious.

So, there is a new “Will Smith Wisdom” vlog. And the first entry is about the benefits of failure.

In the video he asserts that:

So, I was driving my son to swim practice a few months ago.

Let’s go ahead and get this part out of the way – my son’s name is Will. He is named after my grandfather, I promise.

Anyway, my sweet eleven-year-old boy looks at me and spontaneously says,

If people were perfect, they wouldn’t learn anything. ~Will Gratias

There are times as a parent when you swell with pride and take complete credit (internally) for some amazing thing your kid just did.

Then, there are the instances, like this one, when you realize that the lesson you have taught your kid is how not to be. And, they learned it well.

All the Wills in my life (ha ha) are telling me that its okay, preferable even, to fail.

And here’s the big twist.

I finished draft one of this article at 12:42 pm on a Friday.

At 5:40 pm that same day, my daughter texted me this picture… 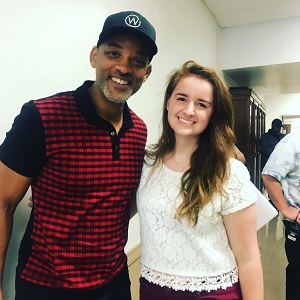 That’s my daughter. And, she has her hand on Will Smith’s mid-back. He was rehearsing for the movie one month ahead of schedule. Maddie and her friend managed to smile their way onto the set.

You can’t make this stuff up, people.

This situation is what my pastor, Billy Hester, would likely call a “WOW Moment.” And, after I recovered from my initial shock, the synchronicity of the encounter struck me.

I revised this post. You’ll likely notice that the second half is dosed with more humility than the first.

In a 2013 video on my YouTube channel, I advised people to do the following things after experiencing failure:

The advice I gave in my video was wrong.

In the video, I treated failure a shameful thing from which you should forgive yourself. A stain on your record of achievements.

I will eventually delete this video and repost a new one. But I want to give you a chance to watch it – if for no other reason than for you to see if you are making the same mistakes I made.

I have, all my life, treated my failures like unwanted vermin.

In 2013, I was recovering from a very public announcement of a goal I did not achieve. And, even though the remnants of that failed goal have formed the foundation of my current business model, I still treated the “failure” as, well, a failure.

I am so stubborn sometimes.

I think I should (finally) start listening to my coach, Jen. For eight years, she has been telling me the same things that Will Smith did in his video.

The failed goal made me a writer. I write these posts easily and joyfully. Because of that failed goal, a publishing company has recently given me an amazing opportunity. I will tell you about it soon.

So, thank you, Mr. Failed Goal. Thank you. I love you. I appreciate you. You are a welcome part of me. I’m sorry I’ve treated you so badly. Come here. Let me hug you.

And, all it took for this grand revelation was eight years of coaching, wisdom from an eleven year-old’s brain, and a chance encounter between Shoeless Maddie and Will Smith.