Put Down the Phone and Pay Attention…

From time to time we all are vulnerable to the lure of “mobile multitasking.”   It seems so convenient to quickly respond to an email or text while you are in the middle of a meeting or another task (such as driving).  If you are among the scores of businesspeople attached to your mobile device, read on.  Let me tell you a story about a real client of mine who accidentally expressed crazy love to his boss’s wife during an unfortunate incident of mobile multitasking.

Chris* had an exciting new relationship with a smart, successful woman.  During one of his team meetings, he was exchanging text messages with her.  The horror is below.  Chris’s messages are in green.  The bubbles in white are from – oh yes – the wife of his boss, whose cell number was programmed into his phone. 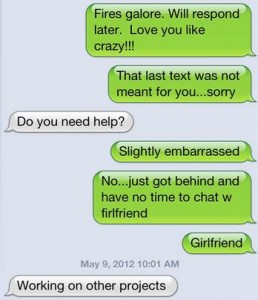 Those of you who have worked one-on-one with me or have heard me speak may be familiar with what I call my “multitasking soapbox.” If you haven’t heard it, I made a video of it for posterity. Here’s the gist:  when people perform multiple tasks simultaneously they lose valuable brain power in the process of switching back and forth.  In short, multitasking is not an effective way to work.

However, before you pat me gently on the top of the head and say “Dearest, Melissa, you are so kind but you simply do not understand, I am actually quite good at mobile multitasking,” read on.

In addition to the brain power that gets sucked away from switching from one task to another, there are other, more insidious costs of mobile multitasking.  First, you send the message that you care little for the people in the room with you.  And yes, that includes your family and colleagues.  Second, there’s the pesky fact that mobile multitasking mixed with roadways results in 9 deaths per day in the United States. **

So, if you have an addiction to mobile multitasking, try these tips:

Let’s go back to poor Chris whose boss’s wife had a fleeting moment where she thought he might be crazy in love with her.  Luckily, Chris and the wife had been friends for years and there was no major harm done.  Chris spent a few minutes wishing the world would open up beneath him and suck him into the abyss, but he kept his job, his “firlfriend,” and most of his dignity.

Would you fare as well?

* Name changed to protect the willing subject of this cautionary tale.

Are you ready to feel balanced and effective at work and in life?


Read my eBook Love Your Calendar…and be monogamous.