Lessons Learned from Failure (and success!) 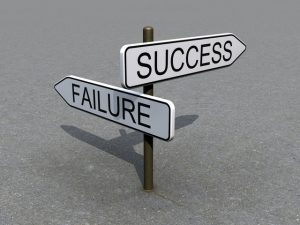 If you don’t want to read a personal story about my professional life over the past few years, stop here. No hard feelings. You can go onto another post.

My goal was to write and publish a book. My intent was that the book would contain all my best thoughts and methods to help people improve productivity at work.

Other people have written books. I should be able to do it too. Notice the first instance of the word “should” in this story.

Humans resist failure. It’s a natural animal instinct. So, like a good animal, I took a step back to lick my wounds.

I restarted the project in 2014. I hired an editor, wrote a 20-page book proposal, and sent it to four publishing houses. The answers I received:  No. No. No. No.

As a productivity expert, I should have succeeded, right? Well, apparently not.

I shelved the book project in late 2014. I had great reasons…really! First, I sold my company. Then, I started working for the firm that bought me. Within three months, I had to unexpectedly leave that firm and relocate to Savannah.

Yes, I’ve just documented the biggest roller coaster ride of my career with newsletter archives. And, these “great reasons” seem pretty lame to me now.

It took me a year to regroup and rebuild my business.

And the stupid BOOK was STILL sitting on my computer doing nothing – nothing for me and nothing for anyone else.

Enter July of 2016. Through an unrelated series of unfortunate events, several clients cancelled their sessions, and I was left with more time on my hands than I wanted.

With reluctance and a great amount of self-pity, I opened the book folder on my computer.

As I sat there staring at the electronic evidence of my failure, I remembered a TED Talk that my friend and business coach sent me a few weeks prior.

The speaker was Astro Teller, a head honcho at Google’s think tank. Mr. Teller’s talk, called the unexpected benefit of celebrating failure, communicated the value of failure in the process of innovation.

Some of Google’s best products were born from their biggest failures. And, failed projects have proven that there was a better way to do things. Failure is beneficial.

So, my Plan A had failed. It was time for Plan B.

Three days later, I had split the thing into six eBooks. I had worked so fiercely for so many hours that my shoulders burned and my ears were ringing.

My first thought when I looked at the six Word docs was:  “This was how it was supposed to be all along.”

Today, the eBooks are launched. I’m selling them on my website. Yes, I have loftier aspirations, but this was the right move for now.

Buy one or six, why don’t ya? They are really great. I promise. I’m really proud of my sextuplets.

So, here’s what I learned. I hope you find it helpful for your BHAGs.

Be careful what you wish for…

I set what are called “performance goals” when I should have set “learning goals.”  I go into this distinction in detail in one of the books, but here’s the gist:  I had no idea what it would take to write and publish a book. I should have set a goal to learn the industry and develop my writing process first. It was kind of like setting a goal to run a marathon when I could hardly get through 20 minutes on the elliptical.

Even though I shared my BHAG with thousands of people, they were still kind and understanding when the project flopped. Nice people are everywhere. So, it’s okay to share your secret goals with someone. Even if you fail, chances are the other person has too.

I became a better writer while working on the book. No surprise there. I am now a compensated blogger for two companies. I blog every week on my website. Writing helped me solidify my approach toward clients. I often didn’t know what I knew about a topic until I wrote about it. All this insight, skill-building, and revenue came from a failed project.

Completion is better than perfection

You should have seen me in July. I was “the angry writer.”  I was angry at myself for dragging this out so long. I was angry at the publishing houses that unceremoniously rejected me. I was so angry that it fueled a manic need to just complete the project – one way or another. I wanted to finish it. And, I wasn’t stopping to consider what it would take to complete it perfectly.

Goals are not destinations, they are train stations

I published the eBooks on my website a couple of weeks ago. Yay! Hubby and I enjoyed some bubbly from our favorite Napa Valley winery. But, the work is just beginning. Nobody will buy the eBooks unless I tell people they exist. And now, I want to write more. I want to make videos and membership sites. There’s so much more to do!

But that stuff will come with time. Or, it won’t.

What are your big, hairy, audacious goals? You can tell me. I won’t judge you if you fail. I’m one of those nice people I was telling you about.

And here they are!  Aren’t my babies cute?