Impermanence and the Fire at Notre Dame Cathedral 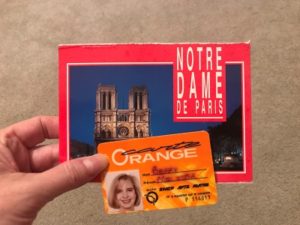 When I was 20 years old, I had a cool summer job. I worked in an orphanage in Paris as a caregiver for a group of eight children.

Because I had to be at work in the wee hours of the morning, I was usually done for the day shortly after lunch.

At least once a week, I would take the Métro to the Île de la Cité and sit on one of the concrete pedestals in front of Notre Dame cathedral. I always had two things with me. I had a book describing the structure and the stories that each of the three portals told. And, I had a banana-Nutella crêpe ordered from a street vendor nearby.

I studied the hundreds of statues, gargoyles, and sculptures that surrounded the arched portals trying to discern the elements of the Bible stories depicted.

Because I was young, hot, and blonde, and because it was France, I would get invited to get a glass of wine at a nearby café multiple times during my doorway study sessions. It was a grand time of life.

As I write this, the fire is still blazing. All I can see in my mind is that magnificent facade. And, I am heartbroken.

Even something that felt as solid and unchanging as Notre Dame is transitory.

I have been meditating a little over a year now. I enjoy the daily practices on the Calm app. Each day has a different theme. On the day of the fire, Tamara Levitt, the wonderful voice on Calm who guides the practice, discussed impermanence.

Impermanence means that everything is transitory. Nothing lasts – not the good, not the bad. Everything comes and goes.

And, while impermanence can seem sad, and maybe even scary, it is the only thing that allows us to appreciate our world, our accomplishments, and ourselves.

Flowers are beautiful because they are temporary. The greatest successes we experience will pass. The greatest failures we live through will pass. Beginnings and endings give life its flavor.

Not even Notre Dame, I suppose.

When I returned to Wake Forest after the most amazing summer of my life, I took a cognitive psychology class. Among other fun topics, we studied selective perception, how we sift through the multitude of sensory stimuli and pay attention to only a small portion of it.

In movies and TV shows, there are continuity errors, aspects of a scene that aren’t supposed to change from one cut to the next but do. Dorothy’s pigtails in The Wizard of Oz shrink, grow, and shrink again all in the same scene. I never noticed it, did you?

Attention is a limited resource, but we consistently overestimate our ability to attend to visual changes in our environments. One study showed that 83% of people think that they would notice major changes to a scene in a movie, while only 11% found the continuity errors.

In a world where impermanence is the way things are, we desire continuity and develop change blindness.

Notre-Dame de Paris took over 100 years to build. It has been damaged by revolution and restored from disrepair multiple times.

As much as my faulty human perception would like to see her as unchanging, she shares the impermanence of the rest of my human experiences.

In the summer of 1993, Paris was the place where I changed. I went from girl to woman.

Our Lady will rise again.