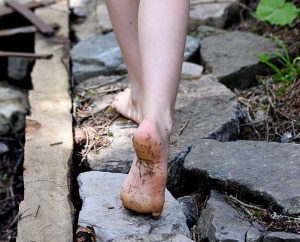 Being the daughter of a productivity specialist has instilled many good qualities in me despite my incessant habit of being late to things. I have color-coded all my school supplies and use a personal planner to write all my assignments in.

I keep my hair brushed, my uniform straight, and I rarely forget things…that is…until one morning when Mom dropped me off at school.

I forgot my shoes.

At my high school, the faculty will send you to the office if you have as much as a shirt tail hanging out of your skirt.

And, I forgot my freaking shoes.

I couldn’t go home because the sophomore class had to take the Pre-ACT and being late would result in being locked out of the testing room. So, I could only face the horrors I was about to suffer by walking barefoot into school like a dirty hippie.

Naturally, instead of owning it and proudly walking the halls with my naked feet, I crept around the back of the main building through the dewy grass like a frightened puppy, praying to God that no one would see me.

Seeking to minimize exposure to my fellow classmates, I snuck to the science building at the back of the campus. However, the condescending looks of the people I passed blazed directly on the grass clippings covering my feet.

I slipped into the girl’s bathroom and called my mom, who was on her way home to retrieve the forgotten footwear. On the verge of tears, I asked her to drive like it was a fast and furious movie. I might as well have come to school in a big banana suit, because, being a teenage girl, this felt like the end of the world.

I finally mustered up enough courage to emerge from the bathroom and attempt to slip into my small homeroom without drawing any more attention to myself.

Then, I heard three words that caused just about everything that could go wrong to go wrong:

My grand plan of hiding in the bathroom and sneaking through a mostly-empty hallway into homeroom was impossible. The entire high school was streaming toward the cafeteria.

So, my socially-awkward self hightailed it across the front of the main building. I thought that I had escaped the sea of people. Then, in sheer terror, I caught a glimpse of Mr. Grahme walking toward me. Mr. Grahme is that teacher known to publicly shame people for everything from wearing out-of-uniform jackets to wearing a skirt he felt was too short (even if it wasn’t!). Very scary guy.

I decided to hide.

I jumped behind an open classroom door and cowered like a dirty mouse until he had passed.

After this dehumanizing event, I kept grinning and bearing this hell I’d created and tiptoed my way towards the cafeteria building.

The shame was far from over, though.

As I walked along the sidewalk to the cafeteria, a popular senior boy caught a glimpse of my mud and grass-covered feet and pulled out his phone. He was adding a video of my predicament to his highly-viewed Snapchat story. I could feel the looks of people that would see this moment on social media.

As I turned away from him, I understood what the villagers must have felt like when they saw the lava at Pompeii. Standing in front of me was my ex-best friend – the absolute last person I wanted to see.

There he was with his new (popular) friends. This shallow, and thankfully forgetful, group proceeded to giggle and stare at me. All I could think was, “Great, more to add to this terrible, horrible, no good, very bad morning.”

I finally made it to the assembly. I was the last person to arrive…almost.

At every all-school assembly, the principal and the headmaster welcome the students into the cafeteria. I stood frozen in the doorway to the cafeteria while the two leaders of the entire school stared at my dirty, bare feet.

I had to sheepishly explain myself to both of them while trying not to curl up in a ball on the ground and cease to exist. I concluded the mumbled explanation by saying, “I promise I’m not stupid.”

With my intelligence secured (and my dignity destroyed), I darted to the back of the cafeteria to my group of friends only to be greeted by sympathetic laughing – which was as comforting as it was embarrassing.

Finally, in the middle of the headmaster’s speech, I received the much-awaited text from my angelic mother saying she had my shoes and was waiting in the parking lot. So, two of my friends graciously helped hide my feet from the faculty when we snuck out as soon as assembly was over.

I finally got to the car and recounted my morning adventure to mom. By the end, she was crying laughing. At least my misfortune brought great joy to my mom.

The moral of the story? No one is perfect and high school sucks.

At least it is high school so no one will remember any of this tomorrow. 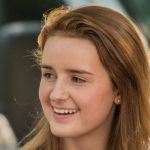 Maddie is Dr. Melissa’s 15-year-old daughter and the source of much love in laughter in the household.

Are you ready to get serious about doing the right things AND doing things right?


Check out my eBook Corral Your To-Dos: and don’t rely on your brain – at all.

If you have ever worked with me, you likely know that I have a love match with Outlook Tasks. I rely on it for my...

END_OF_DOCUMENT_TOKEN_TO_BE_REPLACED

I am so proud of myself! I’m not sorry.

I was on a call with a client yesterday, and she was trying to tell me that she almost doubled her sales over quota...

END_OF_DOCUMENT_TOKEN_TO_BE_REPLACED

The Bittersweet Reality of “Found Time”

Yesterday, my son passed his road test and got his license to drive. He is our youngest, so the days of school drop...